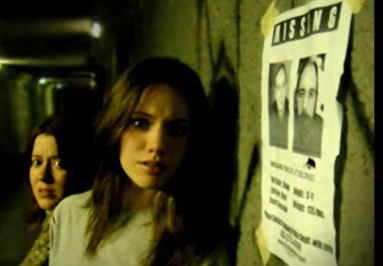 Sometimes it’s worth looking back.

I’ve been so impressed by Midnight Mass, and basically be everything Mike Flanagan has done so far, that I took a couple of hours on a quiet Friday afternoon and re-watched Absentia, his first (available) feature film made more than 10 years ago. It was absolutely worth the re-visit.

It’s amazing how “Flanagan” it is, how many of the themes, and his strengths, are clearly visible even in this ultra-low-budget slow-burn film. Among them: strongly drawn, believable characters … a focus on addiction and obsession (especially the 12 Steps and the religious implications) … monstrous images in the corner of the eye or the deep background.

Equally amazing: it was made for $75,000, partly crowdfunded. And yep, you’ll see actors like Katie Parker and Mike’s brother James who continue to work with him today. James is actually a producer on this film, and a co-writer of some of the Midnight Mass episodes. But the biggest mystery of all: how did he get Doug Jones to sign on? He was already a big-time character actor/monster maker at this point; he’d just finished Hellboy and then went of to do … this?
Amazing. And he’s great. Of course.
There’s a good piece about Absentia, though not nearly enough, on SlashFilm, right here. And these days, probably because of Flanagan’s fully deserved notoriety, it’s available to watch somewhere or other (right now, Fall ’21, it’s on Amazon Prime and Shudder).
Do yourself a big damn favor and watch it.